(update 11 June 2019) Moderator: please close this. The problem I describe below turns out to be due to one of the beds being designated as the village center, which biases the spawn distribution asymmetrically. The village center is not the geometric center of the beds, it's one particular bed. I don't know if that's a bug, or if it's by design. Any enlightening comments when closing are appreciated!

I discovered this when I tried to convert a naturally-generated village to an iron farm and saw that none of the golems were spawning in my planned farm area, but rather to one side of it. I had wondered if there was something about a naturally-generated village that would bias the golem spawn distribution, so I built some experimental farms in a flat world, and they also show a bias.

I built 4 simple iron golem farms using beds and villagers, surrounded by 8 sectioned-off fenced areas to get an idea of the spawn distribution. The attached picture shows an example. I have watched over 30 golems (and even more cats) spawn over the past couple of days.

I thought sample size was large enough to conclude that there's something odd about the spawn region for both cats and iron golems. It definitely isn't an equal probability area around the beds, or around the centroid of the beds.

Here's an example simple farm, with the wood slabs in the ground marking the spots where I observed an iron golem (which I then killed). Two spawned on top of the beds; those aren't marked. East is down, west is up. The distribution pretty clearly excludes the east. 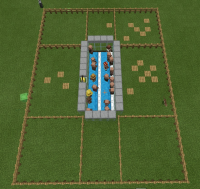 East is down in this image.

That was pretty labor intensive, so I made an automated farm with two tiers of beds (12 on the bottom and 9 on top, total 21) and 10 villagers in the bottom tier, with a water trap and iron collector in each of the octants (I eventually fenced in the whole thing because some golems would sneak out along the fences):

North is up in this image.

I left it running for over 48 hours and counted up the iron ingots collected in each octant (north is up in this table):

Here we have a bit more data. While there a few ingots appeared in the northeast and southeast after about 12 hours, there's was nothing directly east for the first 24 hours running this test. About 70% of the ingots come from the west, southwest, and south.

This was still fairly labor intensive because golems often spawned inside the building (ignoring slabs) and also embedded in the ground, so I had to watch it to clear out golems that spawned in the wrong place.

Observing that the farm in experiment 2 had the intersection of four chunk boundaries among the beds (the farm was built around coordinate 0,0), I built another similar farm with the beds arranged squarely in the middle of a chunk, and let it run for a full day, monitoring it closely. This time the beds were 1 block higher relative to the water trap. I still got golems spawning in the building, but no more spawned embedded in the ground.

The distribution bias was even more pronounced. Zero ingots collected to the south. Very few to the southeast and southwest. After 24 hours, the ingots were distributed like this:

About 70% of the ingots come from the west, northwest, and north. Less than 7% come from the southern sections, with zero ingots collected due south of the beds.