Observed Results:
When the torch first burns out, it does not make a sound. When it randomly lights and burns out again later, it has a chance of making the burn-out sound. 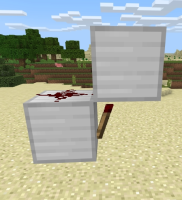 Original Description:
In 1.1.0.55, redstone torches made a burnout sound every time they were inverted. This was fixed in 1.1.1.0, but the fix introduced a new problem: they don't always make the burn-out sound when they burn out.

If you build a redstone torch clock and attach a lever and activate it to invert the torch and lock the contraption, and then deactivate the lever, thus turning the torch back on, the redstone torch will make a sound when it burns out.

MCPE-11344 Redstone torch has no burn out sound