Redstone dust, when powered by an adjacent strongly-powered solid opaque block, can be powered 1 level weaker than the power level of the said opaque block if there is another dust on top of it and they are connected. 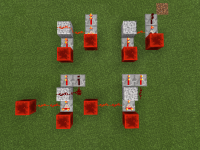 It's true that, in the left hand of the screenshot, redstone wire being powered is "travelling" 1 block. But since both of two dust are adjacent to the same strongly-powered block, shouldn't they both be powered to the same level?

Description of the screenshot:
Top right: A repeater is powering a block to level 15. The block powers an adjacent redstone dust which goes to the side of comparator in subtraction mode. The comparator subtracts 15 from 15 so its output is 0.

Top left: The comparator is subtracting 14 from 15 for some reason.

Bottom right: A comparator in subtraction mode emits power level 1, so it powers a solid block in front of it to level 1 and thus redstone dust next to it is powered to 1.

Bottom left: The solid block is powered to level 1 but the power level of redstone dust next to it is decreased to 0 for some reason.