Imagine when you are building a large Minecraft map of cities, it is often necessary to have high speed transportation through the map to help it convenient for travelling. Since Java Edition 1.12+, it is already possible to design a minecart-based high-speed railway in Vanilla Minecraft, as demonstrated in one of my videos that shows such way of transportation. I did not encounter any critical issues on chunk loaders on Minecraft versions 1.12.x and 1.13.x; however, such an issue presents on newer Minecraft versions like 1.14.x and 1.15.x. I will show the reproducing steps below based on single-player mode of Vanilla Minecraft 1.15.2.

In the following context, note that we assume every block is 1 meter (1 m) in length, width, and height; and every tick is expected to equal to 1/20 second by default.

Briefly speaking, a minecart can be made faster than its default maximum speed 8 m/sec (i.e. 28.8 km/hr) by being continuously teleported on a same direction every tick. To make our reproducing steps as simple as possible, here we make a simple datapack as shown below in a step-by-step demostration.

Step 2. Create a command file called loop.mcfunction under directory "data/mynamespace/functions/" and write a single line of function in it as follows:

Now, we have made a datapack that makes every minecart very fast (100 m/sec) if it has a tag called "needtp".

Next, we are going through the full reproducing steps below as an example.

The Full Reproducing Steps of This Bug

Step 1. Create a new world save with the following settings:

Step 2. Enter the following commands on the chat line by line to configure game rules:

Step 3. Copy the datapack as we made in the previous section, into the new world save. Then, enter the command /reload to let it work.

Step 4. Build a glass platform at coordinate Y=100, and build a simple railway structure upon the floor with two command blocks, as shown in the following screenshot:

Step 5. Enter the following command for Command #1 in the screenshot, so it will let a minecart enter a "high-speed mode" and start running eastward at high speed.

Step 6. To simplify our reproducing steps, enter the following command for Command #2 in the screenshot to add the property NoGravity onto the minecart. Note that we do not often use this in realistic application; instead, it can be replaced with just a straight track that is long enough for testing.

Step 7. Place a minecart on an ordinary rail and get on it, and then hold the W key to slowly move the minecart until it triggers the previously entered commands by the detector rail.

Step 8. Once the high-speed commands are triggered, it is expected that chunks are always loaded on the way. Minor lags could occur on Minecraft 1.13.x, but they are acceptable. However, in Minecraft 1.14.x or later versions, once an occasional lag occurred, it is likely for the player to enter unloaded chunks. To make things worse, new chunks are sometimes not able to be loaded anymore, and the game freezes forever accordingly. It is even unable to leave the minecart with the Left-Shift key on such a scenario. The only way to get rid of this condition we found is to switch the player's gamemode to spectator.

The following screenshot shows the scenario when a player gets stuck in such a condition: 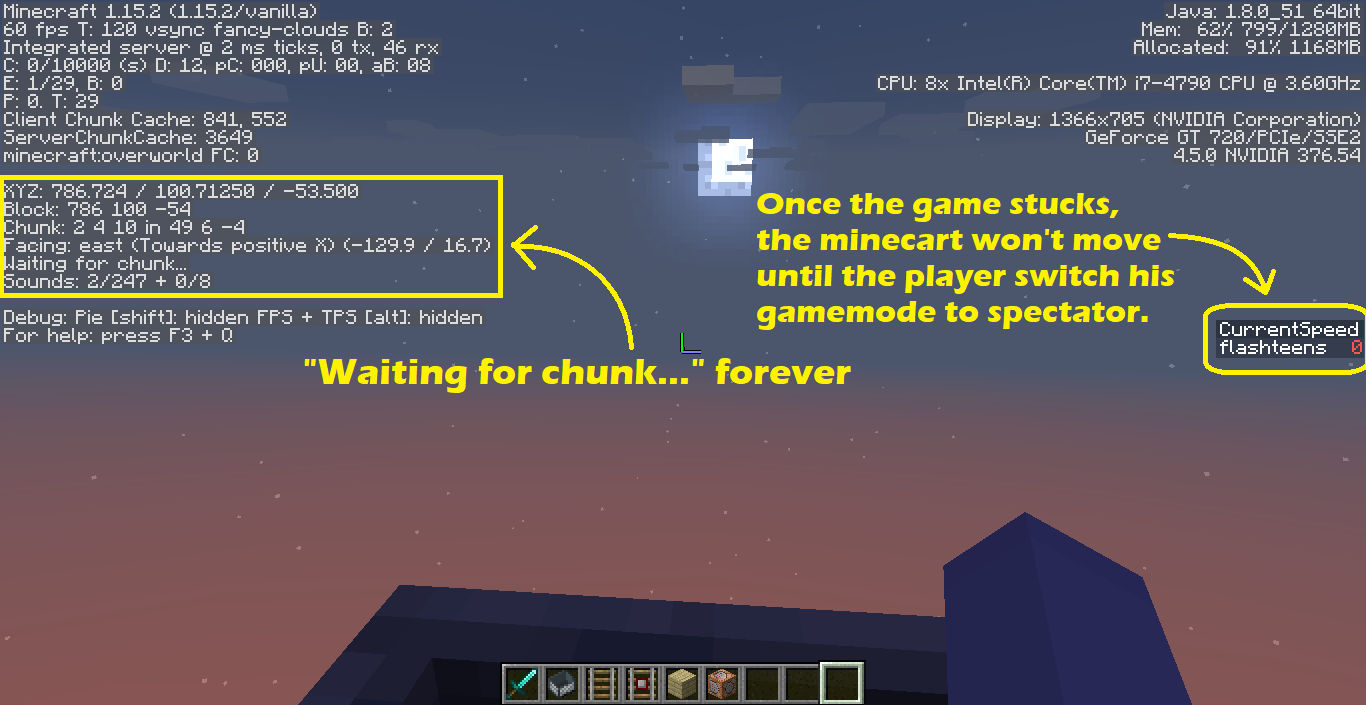