Note: leaves are only affected by this when using fast graphics/fast leaves and after turning the wire on and off after changing the setting.

In the screenshot shown below, you can see a line of redstone dust being "functionally" cut by a hopper but "visually" not. 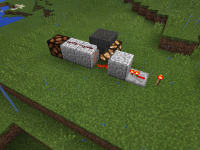 The reason why the lamp behind the hopper is lit would be that the redstone "line" next to it is treated internally as a directionless redstone dot.

Edit:
Hoppers now works as intended but there are other blocks which still exhibit similar behaviour, see picture and comments:

MCPE-14174 Redstone does not align correctly when "cut" by farmland block and grass path block.

MCPE-15851 Observers are not consistent regarding their opacity.