I Created a world using the Mesa Plato seed hours before. I took a brief break and rejoined the world via remote play with none of my inventory, and the texture packs (city and, natural) that I had previously applied then deactivated, were reinstalled. I was also fully reset. I decided to try the world on the actual Xbox ware I had all my stuff and was in the same spot although the chunk I was in was missing along with the vast majority of my base.

I was remote playing to my Xbox one s. But I made the world on his Xbox one x. 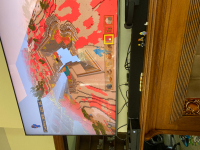