I found a chunk in my base that I assumed was just unloaded (something I’d had problems with before in that same spot) but when I tried to walk over it to get it to load, I fell straight through into the void. The mobs on the chunk were floating, which was why I assumed it was just a visual thing. When I came back afterwards it was completely normal, but I’d lost all my gear. I’ve never had this happen before, so maybe it was just a one-time fluke, and it was on a Realm with other people playing at the same time, which has been pretty laggy for me recently. 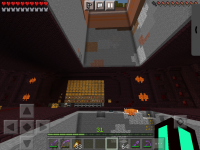