Floor coral fans in Bedrock can face east/west or north/south (this is a Bedrock-exclusive feature).

However, due to incorrect angle logic in coral placement logic, coral fans only take the east/west direction when facing south, southwest or southeast (sun on the left in the morning).

This is observable to the trained eye by placing coral fans in a row by facing north, east, south and west.

In the below image, you can see all except the bottom-right coral fan have the same orientation. The bottom-right one has an X axis; the others are all Z.
(Look very closely at the top-left of each fan; there are some pixel differences between bottom-right and the others.)

This problem was discovered while implementing coral fans in a third-party server. My observation is that the game doesn't handle negative results from atan2() correctly (this occurs when placing coral fan while facing north). 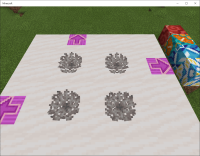