Calculation of BlockPos getSquaredDistance() is incorrect; the method is used to get the distance between two BlockPos, which return offset. This method was not intended to be used against two BlockPos, although it is used everywhere. Recent code like Sculk Sensors does it correctly by specifying that it should not be treated as a BlockPos. This results in issues across several parts of the game, including geode generation, chunk rendering, points of interest (POI) and pathfinding in general.

Attached below is an image visualizing the current broken calculation and the expected calculation. 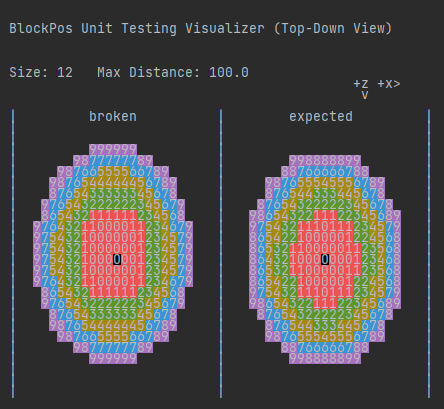 Code analysis using 1.18.1 Yarn Mappings.
If you look at this code:

When run you would expect the result to be 0, although the value is actually 0.75.
This is due to getSquaredDistance automatically setting treatAsBlockPos to true, which in this case shouldn't happen since it's already a BlockPos. Here's the code for getSquaredDistance:

As you can see. Asking for the distance between two BlockPos adds 0.5D, which it should not do since BlockPos is already a BlockPos...

The fix is simply to override getSquaredDistance in BlockPos so treatAsBlockPos is set to false by default.
Alternatively, you could just change the default to false, since the default value is only ever used for BlockPos calculations. Yes...

Download the world zip & follow the instructions. It will show you one of the many directional bias that this bug adds.

Now it's time to mention what exactly is broken by this code.

Method Naming Format uses both 1.18.1 Yarn Mappings (left) and Mojang Mappings (right).
You will notice a pattern with these, usually it's the distance formula having an offset center.

I am so sorry if you read through that entire thing...
Most of these are used in many other places. Which becomes a nice little maze to traverse.

TL;DR this is terribly broken