This is a direct continuation of . I post it as a new report since the old one already contains several similar bugs and I don't want it to digress too much, given that it's already closed for quite a while now.

The issue remains the same, namely that the topmost lightmap is not correctly initialized to a light value of 15, but rather to a value of 0.

The lightmap will then be registered for relighting inside onLightArrayCreated(...) and finally be relighted in updateLightArrays(...). There are however some problems with this initialization code:

There is another bug caused by the initialization code, namely MC-169498. The problem here is that upon removing a lightmap, the new topmost lightmap is scheduled for reinitialization. In case the corresponding subchunk is empty, initialization then sets the whole lightmap to 15 and spreads light to its neighbors. In the setup described in the bug, as soon as the stone block is broken, this will cause the subchunk it was in to be set to a lightvalue of 15. Note that also MC-169913 plays a role here as it causes lightmaps to be removed before the block removal is properly processed; however, that doesn't really matter for the solution discussed below.
As always, the problem with this is that this initialization changes light values without informing everyone about it; in this case, the subchunk containing the sandstone blocks is not marked dirty and hence not rerendered. As can be seen, the lighting is actually correctly at a value of 15, but the subchunk is not rerendered and hence still shows the value of 14. 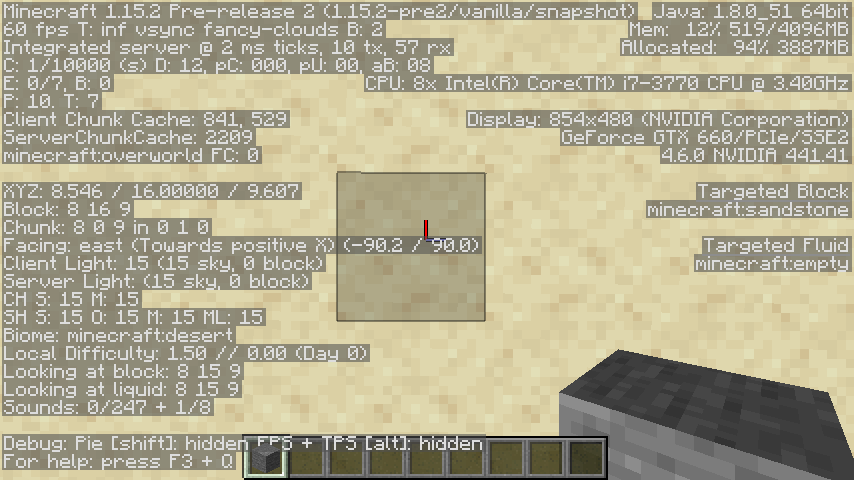 My suggested solution is the same as for : Don't change light values by creating lightmaps, but initialize them to the exact values that would have been returned before. As no light values change, you don't have to inform anyone about any changes and you don't have to schedule any additional light and darkness propagations in order to compensate for changed values.
Concretely, this means to initialize topmost skylightmaps of already lighted

chunks with a value of 15 and not doing anything else. For not yet lighted chunks, simply initialize the lightmap with 0, as is currently done, and also do nothing else in this case (except potentially some actions required for initial lighting, see below).
This will get rid off both issues and in fact allows to remove some now obsolete code, reducing code complexity by quite a bit.

As far as I understand it, the current lightmap initialization code basically handles the initial skylight. So, let's look into that in more detail and see that my suggested solution doesn't interfere with this. In fact, it will allow to simplify and optimize the code a bit. In the following, I will assume MC-170012 to be fixed.

During initial lighting, the topmost lightmap gets scheduled for initialization inside

The initialization then basically pushes skylight from above to the topmost lightmap and then propagates it, using some optimization in case the subchunk is empty as mentioned before (but that's not relevant here).
Now let's prove the invariant inductively.

Note that this argument never used the complicated initialization logic for lightmaps of already lighted chunks. All the relevant logic is carried out by the initialization code as scheduled by setLightEnabled(...). Hence, it is safe to simply initialize topmost lightmaps in already lighted chunks with a skylight value of 15, without causing any interference with the initial lighting code.

There might in fact be a missing point in the above argument, namely in case the pseudo-empty region of not yet lighted chunks can change over time. This would cause bugs already in the current version of the code and would need a fix independ of my suggested fix for the issue described here. I'm not familiar enough with the worldgen code to say whether or not this event is possible. For completeness, I will describe the issue more precisely and show that the current code would not deal with it.
Suppose we have a chunk that has a lighted neighbor, so it is sufficiently far through worldgen to have reached the pre_ligth stage (and hence probably shouldn't receive any worldgen block updates; but as I said, I am not sure about this) but is not yet lighted itself (and hence probably shouldn't receive any block changes caused by actual game ticks). Now suppose it is possible for this chunk to receive block updates, in particular, we may spawn a stone platform in the empty region. Now, the subchunk containing the stone platform and all subchunks below are pushed to the non-pseudo-empty region. This breaks our invariant because they must no longer be opaque.
The current initialization code manages to push in light from the side in case a new lightmap is spawned in the respective neighbor chunks. However, if the neighbor chunk already had a lightmap, the initialization code won't do anything and we are missing contributions from all sides. As the stone platform blocks light from above and there is no mechanism that will eventually push in light from the sides, this will indeed result in a presistent lighting error.
Fixing this is rather easy: When a subchunk in a pre_light ed but not yet light ed chunk turns non-empty, we need to pull in skylight from all sides for this subchunk and all subchunks below that were previously in the pseudo-empty region. Note that we actually don't need to pull in light from the top faces, as these were already transparent before, but we do need to pull in light from all bottom faces, which might have been opaque before.
As you can see, this fix is independent of lightmap initialization for already lighted chunks.

As I said, I can't say whether this is relevant or not.

I hope that my suggested fix is now sufficiently convincing

Finally, let's discuss some simplifications and optimizations that are now possible:
Since the (current) lightmap initialization code now solely deals with initial skylight, we can now properly move it to the rest of the initialization code, where it belongs, instead of being scattered around.
As lightmap initialization now indeed no longer changes any light values, we can remove those parts of the code that compensated for changes in light values. Concretely, that is the last part of updateLightArrays(...) that currently spreads darkness to the previous topmost lightmap

Also, there is no need to relight the new topmost lightmap after removing a lightmap (in fact, that doesn't even seem to be necessary with the current code).
Removing those two pieces of code should already simplify the code by quite a bit and hence improve maintainability.

Now, diving into some small optimizations that may squeeze out a bit of performance:

Hope this is helpful

MC-196614 Queued lightmaps are ignored for skylight propagation and initialization