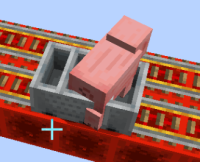 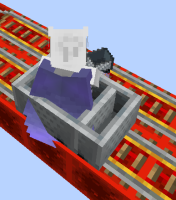 Minecarts on the same railway can stick together, with as well as without one or several entities riding them, including the player.

In 19w02a, this doesn't seem to happen in EW-direction when there are only 2 unridden minecarts on the railway, but it always happens when there are 3 carts on the track (have to conduct more tests to be 100% sure about it not happening with 2 unmanned carts in EW).

If one of the two carts is ridden by an entity, the sticking-together already happens with only 2 carts on the track.

In 1.13.2, it seems to also happen in railways EW-direction, as well as on railways in SN-direction, too. More test details and potential differences between 1.13.2 and the current 1.14 snapshot asap, needs more testing overall.

Stuck carts can result in getting stuck - at least in narrow railway curves. Resulting in them being also pushable outside of the railway, and continuing momentum (MC-14)

Stuck carts can also result that they will not be able to take a curve, they will be going back and forth on one railway line

Maybe this bug got caused due to a fix of ?
The timing - 1.13.2 - would fit, and also reopening of MC-14 in 1.13.2; on first glance I couldn't find other fixed bugposts in that time period where this bug here could have been caused by.

MC-14 Stacked minecarts continue momentum when not on a rail