Issue 1:
Holding certain items doesn't display them when you hold them, see screenshots. 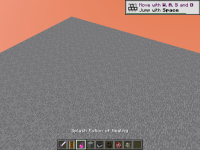 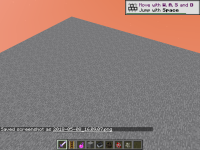 This occurs e.g. with enchanted swords, potions, books, possibly with anything with additional NBT?

Issue 3:
Undamaged unenchanted tools work (leftclick), e.g. you can mine blocks with a pickaxe, you can shovel dirt; but as soon as the tool is damaged, it ceases to work, neither pickaxe nor shovel can mine any further block.

Rightclicking though, e.g. hoeing dirt into farmland or creating a pathblock with the shovel still works, with damaged as well as undamaged, enchanted as well as unenchanted tools, see video:

MC-129229 Tools only work for destroying one block, then they don't break anything at all

MC-129239 Items bob up and down when walking on Ground

MC-129269 Tools shiver like mad and are mostly useless

MC-129295 Cannot break more than ONE block per tool

MC-129310 Unable to harvest past the first block

MC-129321 Multiplayer- tools can only break one block

MC-129329 Tools Not Working After Getting Used Once

MC-129333 All pickaxes break blocks, then after one use, does the "charging up" animation, and then will not break blocks

MC-129340 Tools can not be used properly all the time because they are shown shaking in the hand when held.

MC-129352 Cannot mine blocks or cut down trees with tools. Game breaking bug

MC-129362 Potion items are bugging while holding it